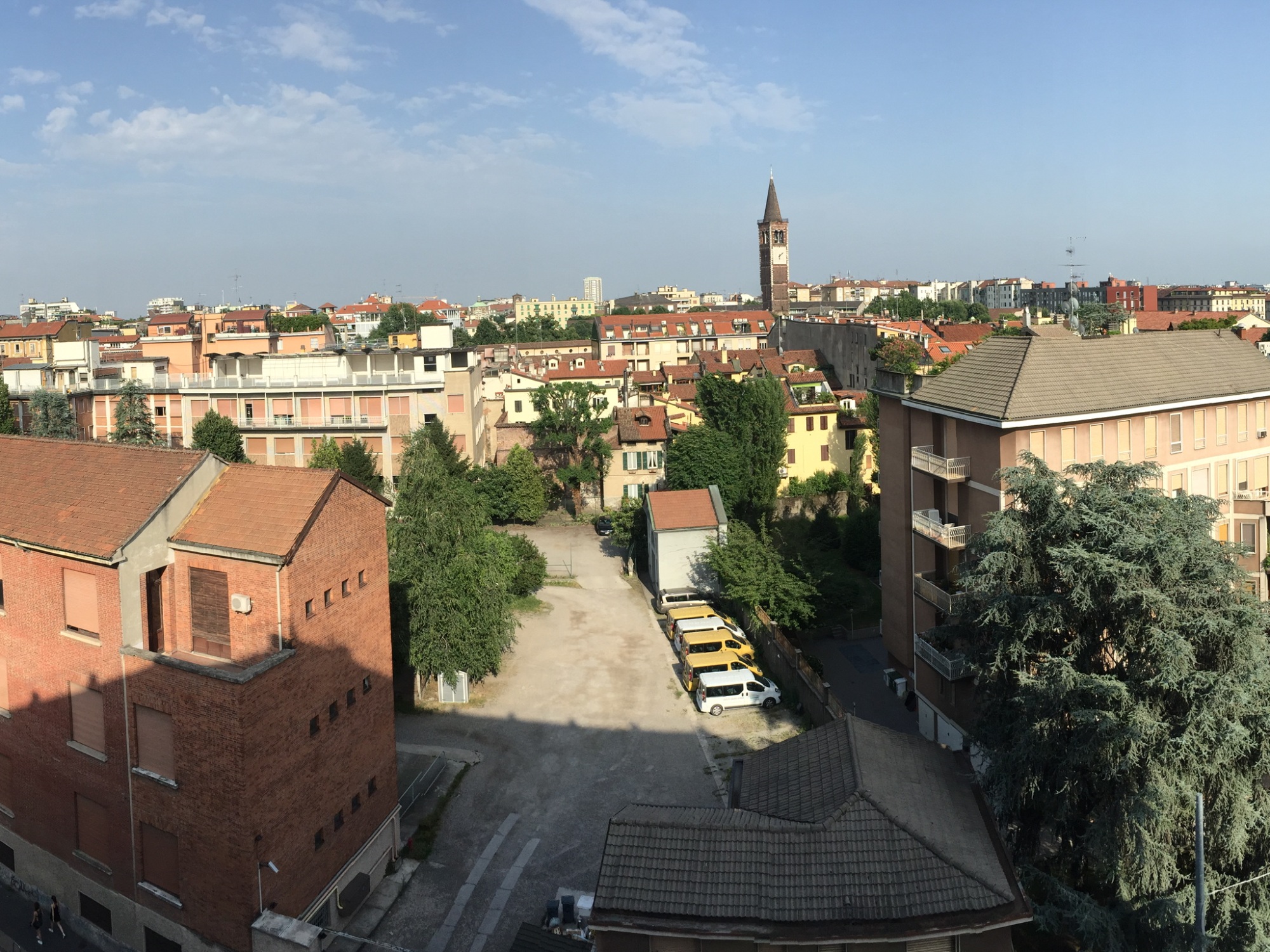 I suppose a few people may be wondering why we chose to go to Italy this year.   I think that in our minds, there are the 3 “Big Ones”…the top places in Europe that you must visit.    We’ve done England and France, so for us, the obvious choice this year was Italy.

I took the advice of well-traveled colleagues and friends and we set our itinerary to begin in Milan and then to Venice, a layover in Bologna…then Florence…a few Tuscan hilltop towns and finally to end the trip in Rome.  It’s going to be a busy trip and we are staying in 4 separate apartments/hotels over the next two weeks. 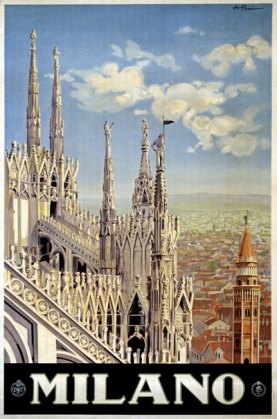 Leaving New York last night started too good to be true.  There was absolutely no traffic and JFK was seemingly not very crowded.   But then the kiosks wouldn’t read Josette’s passport and we were sent to the “bad” line, i.e. that line that never moves. The clocked ticked away…and our boarding time was fast approaching.  We finally got our boarding passes only to meet a humongous tangle of people at the TSA security gate.  I guess being July 4th with heightened terror threats, they were checking things extra thoroughly (or not…maybe it was just a less-trained and less efficient skeleton crew working on a holiday).  But by the time we got to our gate, the flight was boarding.  So…lesson learned…as my dear Mother always told me…you can never leave too early for an appointment!

The flight was on time and we had a smooth ride. I can’t relax enough to sleep on a plane…so it was a long 7 hours, but as we approached Italy and flew over the Swiss Alps, I got some nice pictures. It was an amazing view. 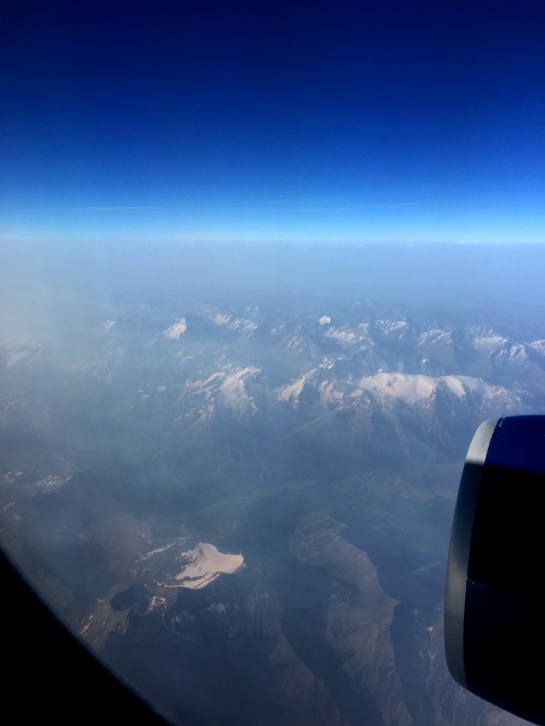 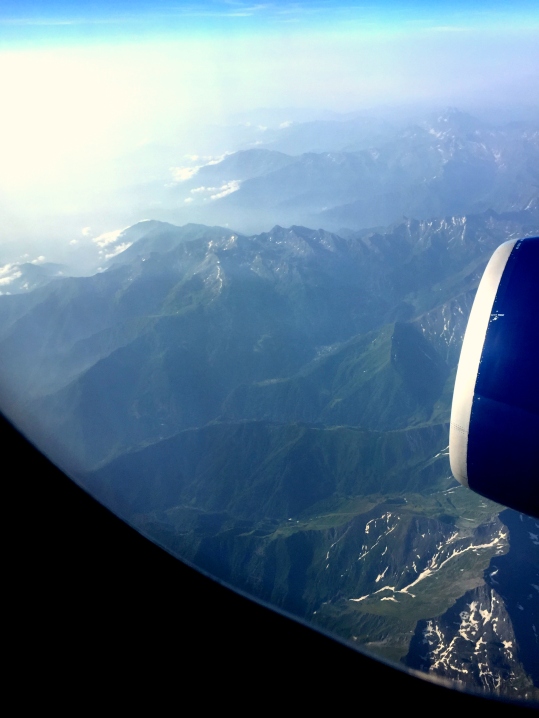 Usually, when we fly into a foreign country, for ease of mind, we set up to have a driver pick us up and take us directly to our apartment.  However, we found out that the flat fare for a trip from the airport into Milan was €90 which is about $100 in US Dollars. That is a lot to pay.  It just seems like throwing money away, so for the first time, we decided to take a train into the city.  We made our way thru customs, had our first cappuccino of the trip and hopped on the Malpensa Express train into Milan.  It was a fast, easy ride that took about 30 minutes. 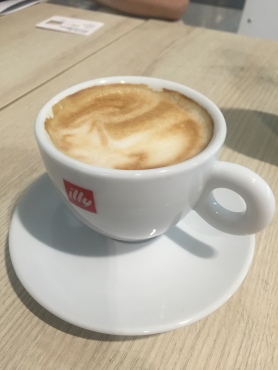 At the Malpensa Cordorna station we had to find a cab to take us to the apartment.  But the city was very quiet and we found one right away.   Our apartment is centrally located in a newish building (compared to the much older ones in the area) with an elevator, air-conditioning and spectacular views of Milan! 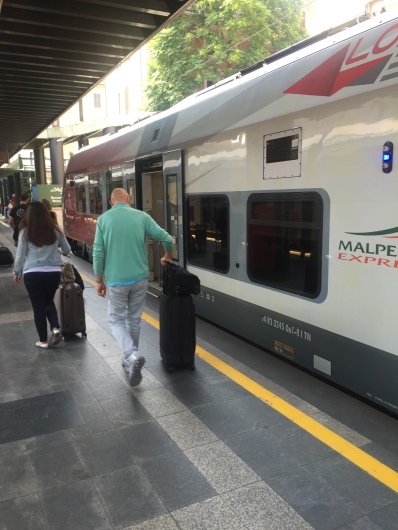 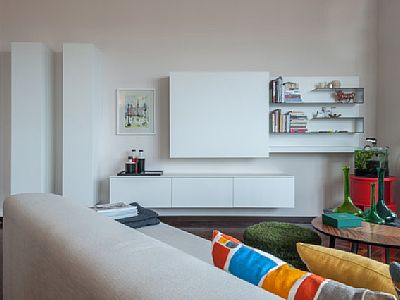 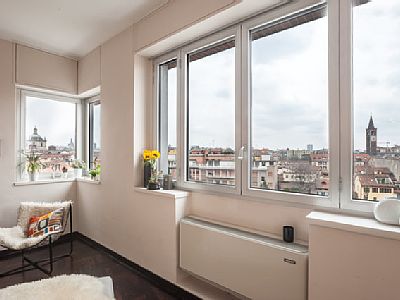 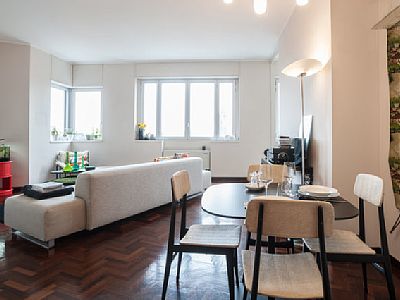 Did I mentioned that is has been really HOT all over Europe for the past two weeks? We are talking low 100’s .  We are used to heat and humidity in New York, but we were melting today!  Unlike London and Paris where you can’t find AC anywhere…Italy does have AC in most museums/stores/restaurants.   But it is not that over-the-top American AC that literally makes your lips turn blue.  So I am not going to complain, but I will say that even in “air-conditioned” establishments, we were still sweating through our clothes today.  Hence, there are not a lot of pictures of us. We were a hot mess.

After we dropped our bags off at the apartment, we decided to walk over to the Navigli district, which is a centuries old system of canals and waterways.  The first of these canals goes back to the 1150’s.  The buildings along the canals used to be merchant establishments, but now serve as bars and restaurants with apartments above.   It was definitely a tourist trap in most ways, but architecturally, it was very quaint, and it gave us a taste for Venice and what is yet to come. 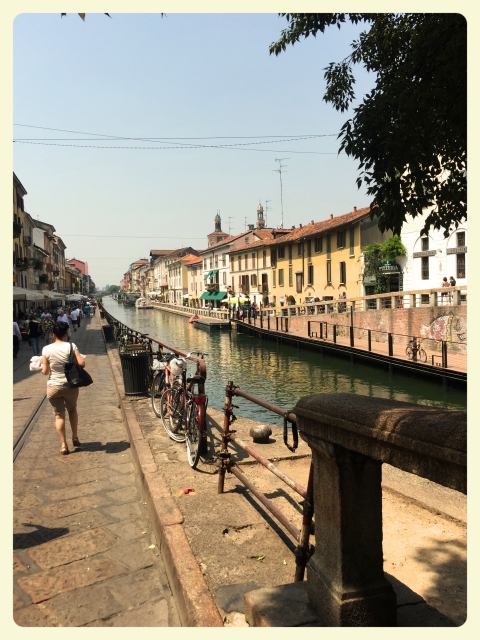 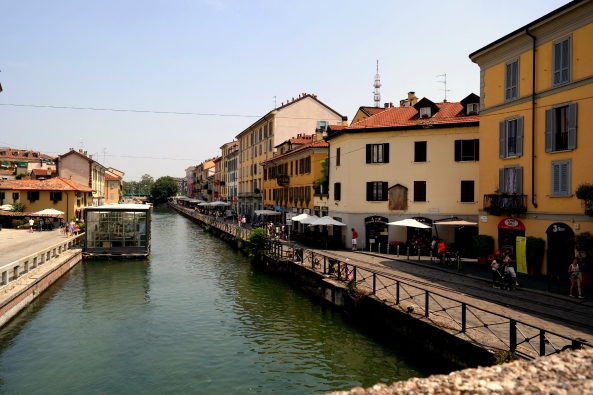 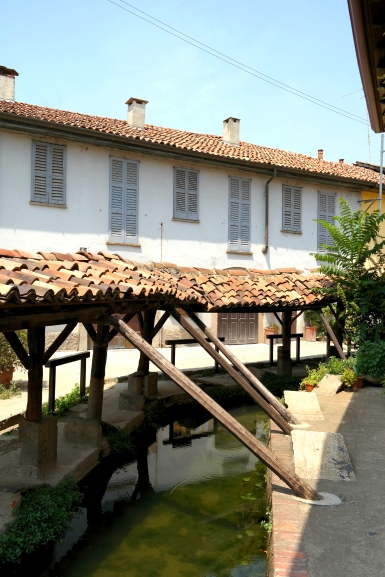 We stopped for lunch where Josette ordered an “iced coffee”.  What she got was more of a non-alcoholic iced martini…but it was refreshing nonetheless.  I suppose its pretty silly to order something so American when you are in Europe…we will stick to espressos for now on! 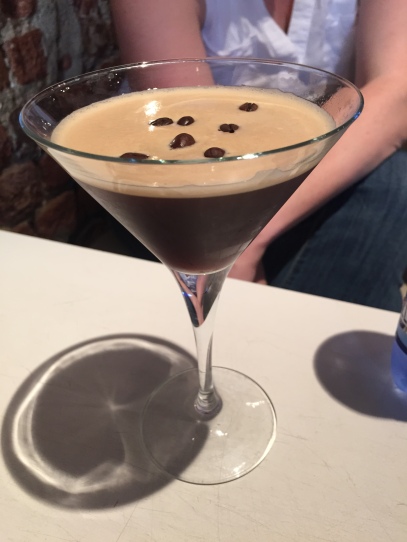 After that little excursion, we came back to the apartment to clean ourselves up a bit. Lena got her first gelato of the trip, but it melted before she could finish it. Did I mention that it was very HOT today? 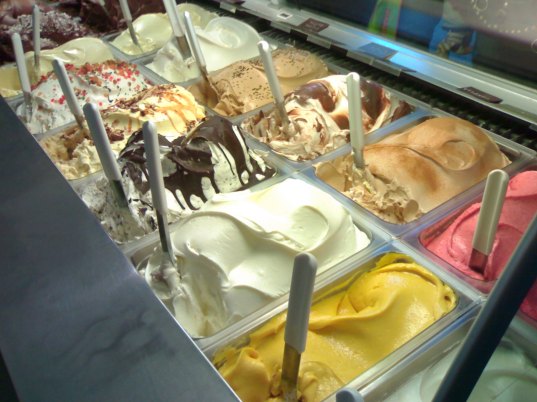 By this point, jet leg was hitting us all pretty hard.  It’s Sunday, and we are beyond exhausted, but we knew that on Mondays, most museums are closed…and we leave on Tuesday at Noon.  So we have to make the most of every minute.  We were troopers and rather than nap, we went back out to the Museum of Science & Technology–Leonard da Vinci.  From what I had seen on TV and read about in books it was a museum dedicated to Leonardo and his inventions.  But that was really not the case.  It was a vast museum that is basically like the Air and Space Museum in DC combined with the American History Museum.  They not only had replicas of  Leonardo’s inventions , but they had planes, trains, ships, missels, submarines….all under one roof.  The da Vinci stuff was nice to see, but all of the other was a bonus. 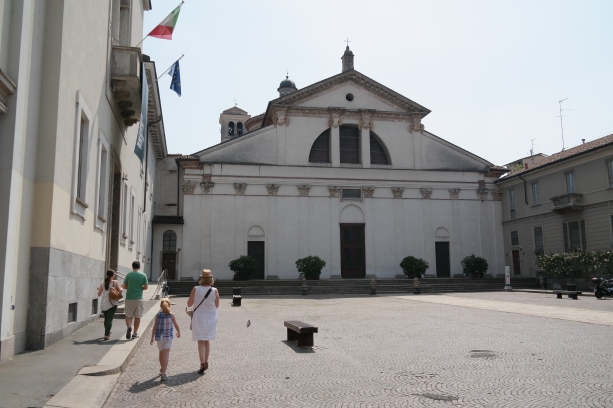 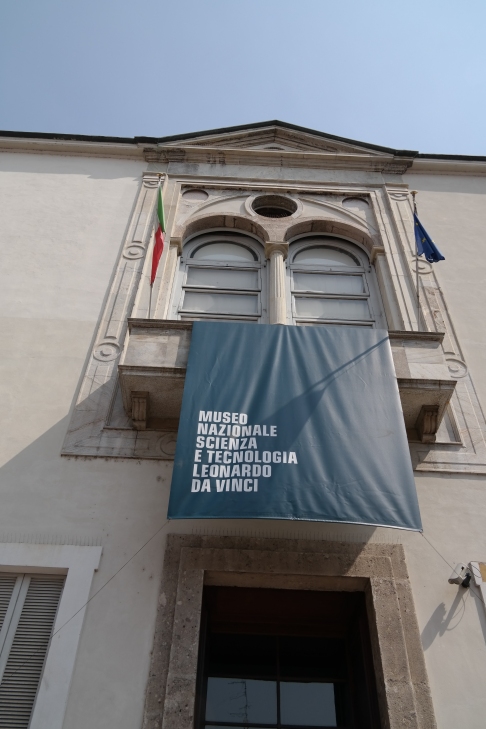 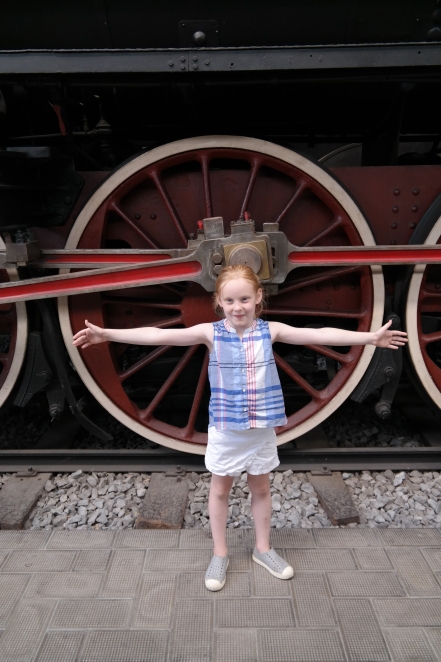 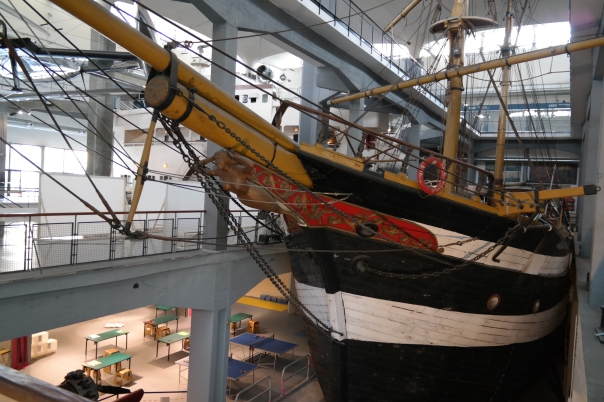 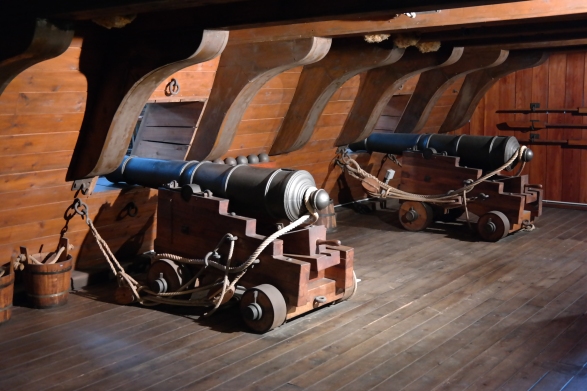 The other bonus of the museum was the actual building itself.  It was originally a monastery, built in the early 1500’s by an Olivetan order.  In the 1815’s when Napoleon was in power in Milan, he turned it into a military hospital..and it was used for army barracks in the second World War. So this place has seen some history. 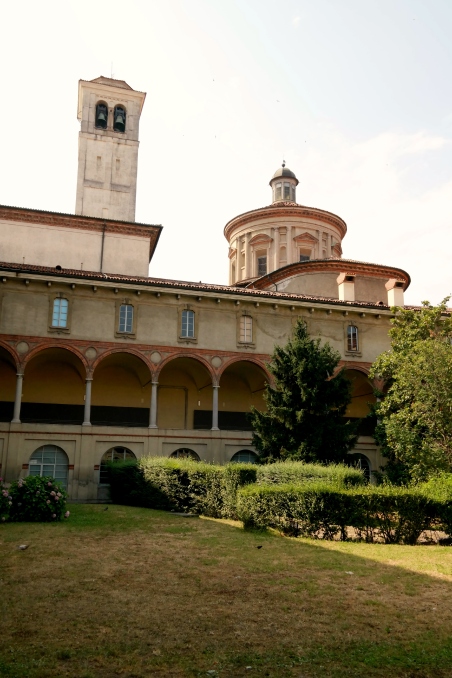 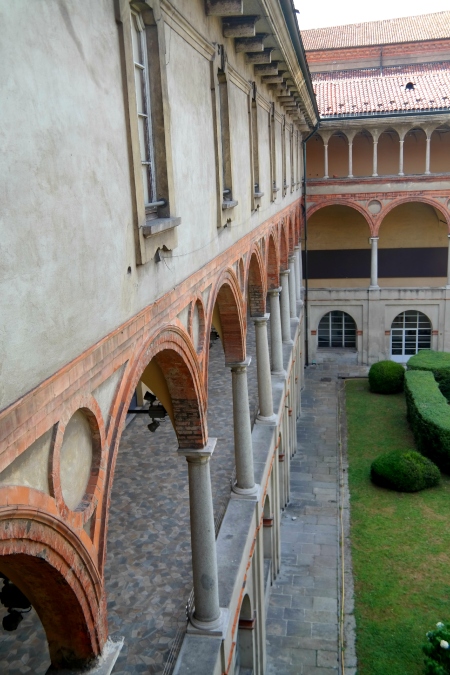 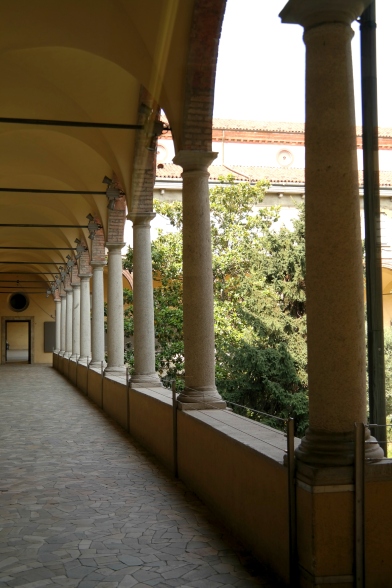 We took the long way home and walked through some of the neighborhoods near our apartment.   I don’t know what I expected Milan to look like, but it is quite beautiful and not as “industrial” as it is painted out to be in some guide books.   Like Paris, there is some uniformity to the facades of the buildings in terms of height and style….but it has its own uniqueness.  We will do more walking tomorrow to see what other parts of the city look like. 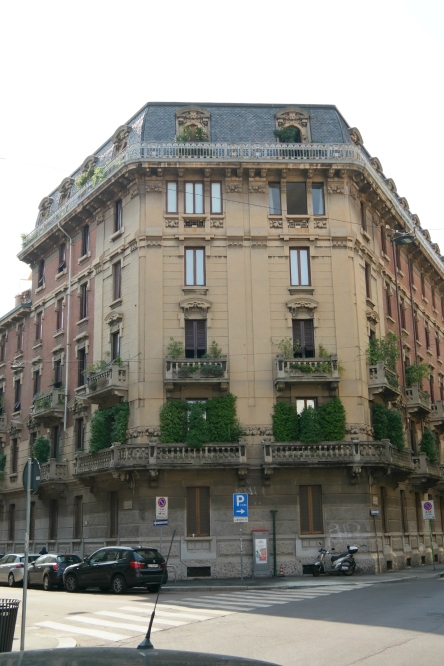 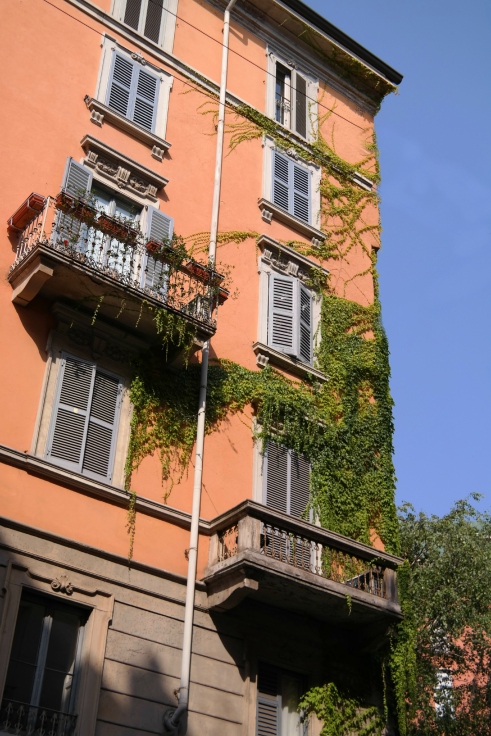 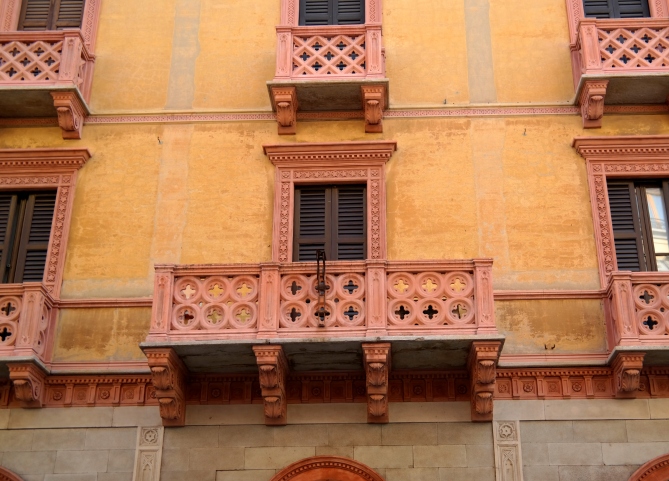 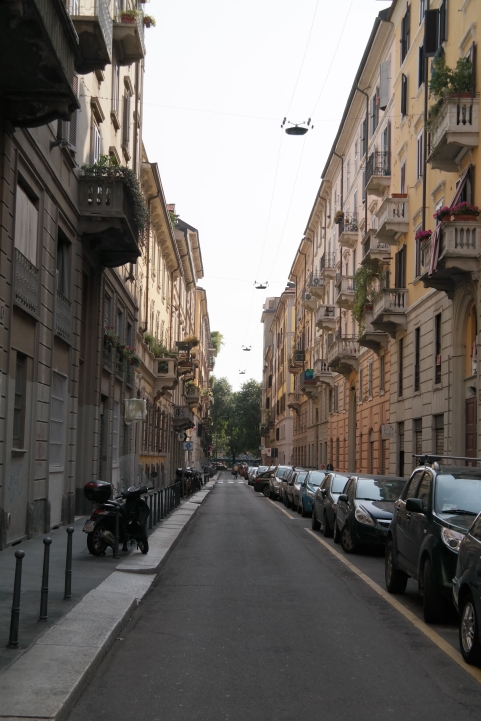 We ate lunch out at a restaurant today, and we spent the previous night eating airplane food for dinner and breakfast. So we decided to make a simple dish at home–pesto & pasta (pesto is popular in this region).    And then it was off to bed for Josette and Lena….and time for me to work on the blog.  Honestly, I am crossed eyed as I write this.  I’ve been awake for about 36 hours at this point.  Apologies to you, but my first day posts are never as good.  With a little sleep and getting used to being here….the blog will get better and we have MUCH more exciting stuff planned for the rest of the trip!  Buonanotte!

P.S. This was the sunset view from our apartment while I was writing this. 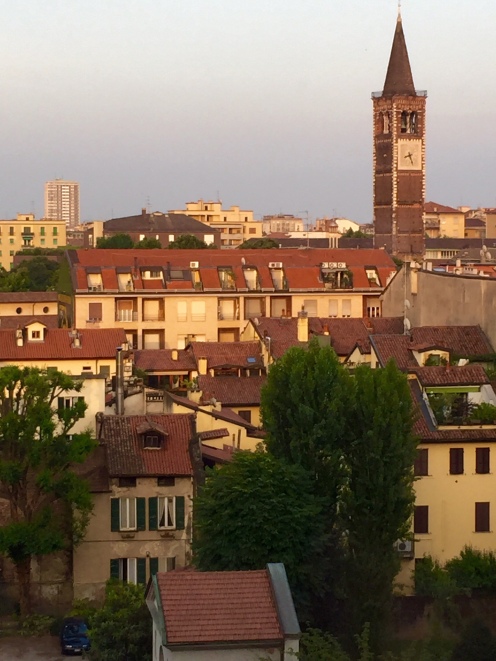