Today was our visit to the Palace of Versailles (the French refer to it as the Chateau du Versailles)…but if you know anything about it, Versailles is much more than just a palace!  The vast gardens as well as all of the other buildings (Grand Trianon and Petit Trianon) make this a massive place to tour on foot.  All told, we walked over 8 miles!   Lena (our 6 year old) is a trooper.  She ran most of those 8 miles.  Even as hardened New Yorkers that walk everywhere we go, I must admit that by days end, our feet were like raw, ravaged pieces of meat.  Not to mention that it was rather muddy and puddle-filled all around the grounds!  Luckily, the rain held off for us all day, but there was a bit of a cloudy, foggy gloom hanging over Versailles, but that did not spoil our visit.

Versailles is only a 30 minute train ride from Paris, and then a short 10 minute walk from the train station.  Like some of the great houses of England, I suppose I had always envisioned it being a stand alone structure out in the country…sort of isolated…but it is literally smack in the middle of the town (but I suppose at one time it was isolated, and the town of Versailles grew around the palace).  As you are walking from the train station down the quaint streets, you turn a corner and the palace gates abruptly hit you in the face… and then BAM…a big, gleaming, palace stands before you! Voila!

I specifically recall learning about Versailles in my 9th grade history class.  My eccentric, older teacher, Ms. Hoskins, was very dramatic in her descriptions.  I remember her describing the vain and powerful King Louis XIV, the Sun King, who remodled Versailles during his reign.  It was he who had the famous Hall of Mirrors constructed.  Ms. Hoskins would pretend to be a visitor to Versailles, and she would pace back and forth in the classroom, pretending to be walking down the Hall of Mirrors, admiring all of the wealth and grandiosity of the French Court.  Looking up and around at the reflected light of the mirrors, the artwork and chandeliers.   And having been there now, I realize that she nailed it…this is exactly what you feel when you walk in the space (when you aren’t being trampled by the other tourists who insist on taking selfies every 5 feet).  The Hall of Mirrors is beautiful, over the top…a little gaudy…ostentatious…but truly amazing.  Over 240 feet long, with a total of 347 mirrors…and at the time it was built, in the 1670’s, mirrors were super expensive, rare, and were imported from Venice.  So having this many mirrors in one room was the ultimate display of power and wealth. 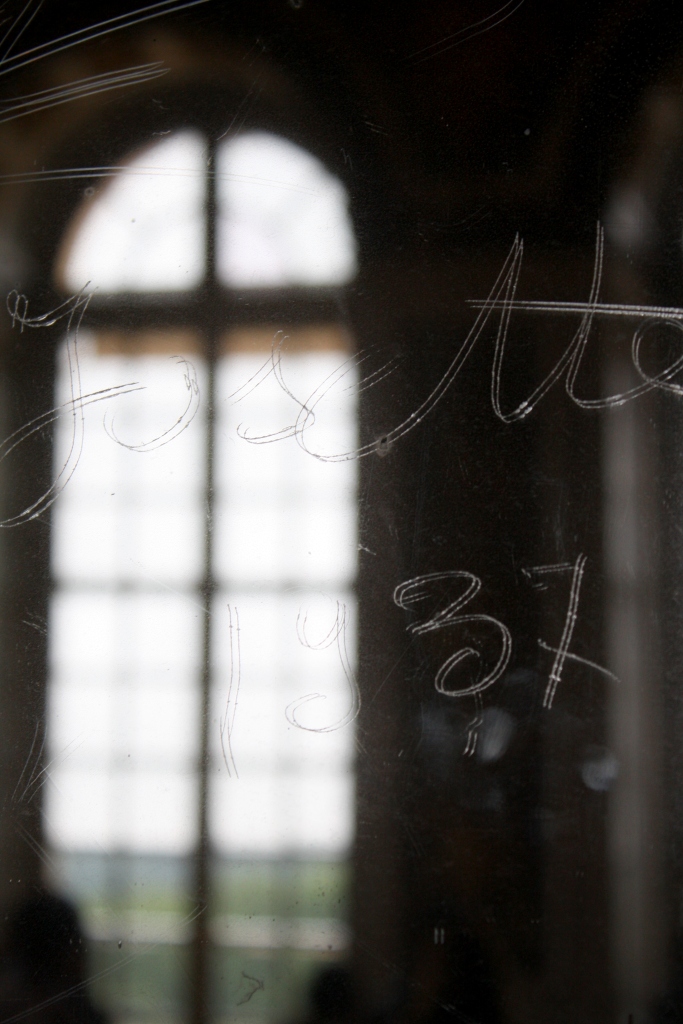 After the Hall of Mirrors, we toured all of the private apartments of the King and Queen, but they were too crowded and dark for good pictures.  You can imagine that they were silky and gold and big and sumptuous (I did get a few pics of Marie Antionette’s bedroom).   After finishing the interior tour, we grabbed a coffee and a pastry and then headed out to the gardens. 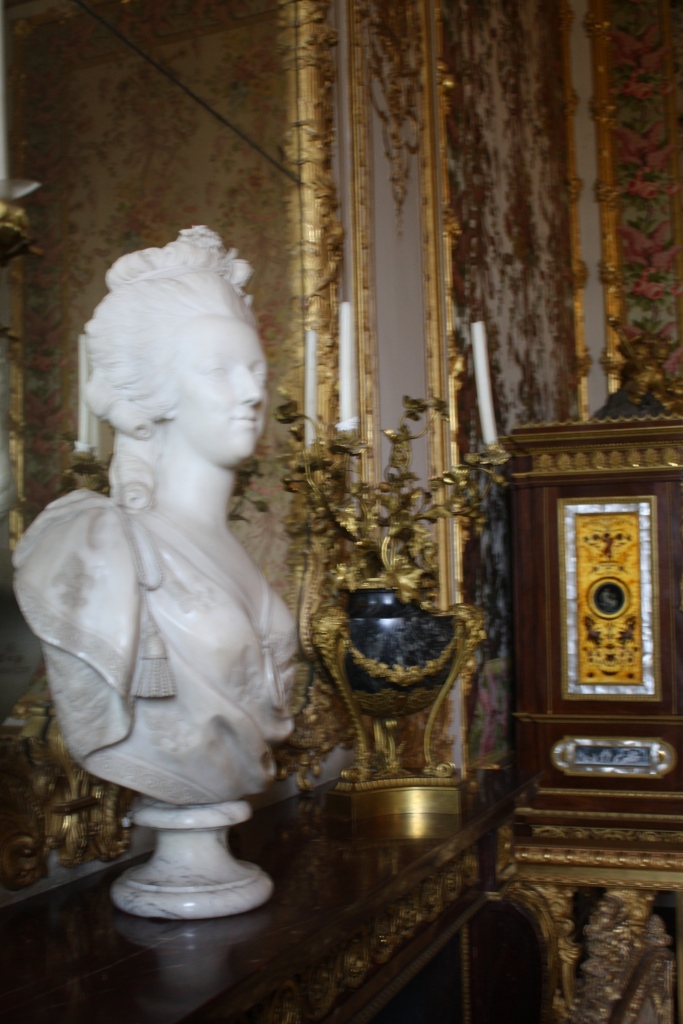 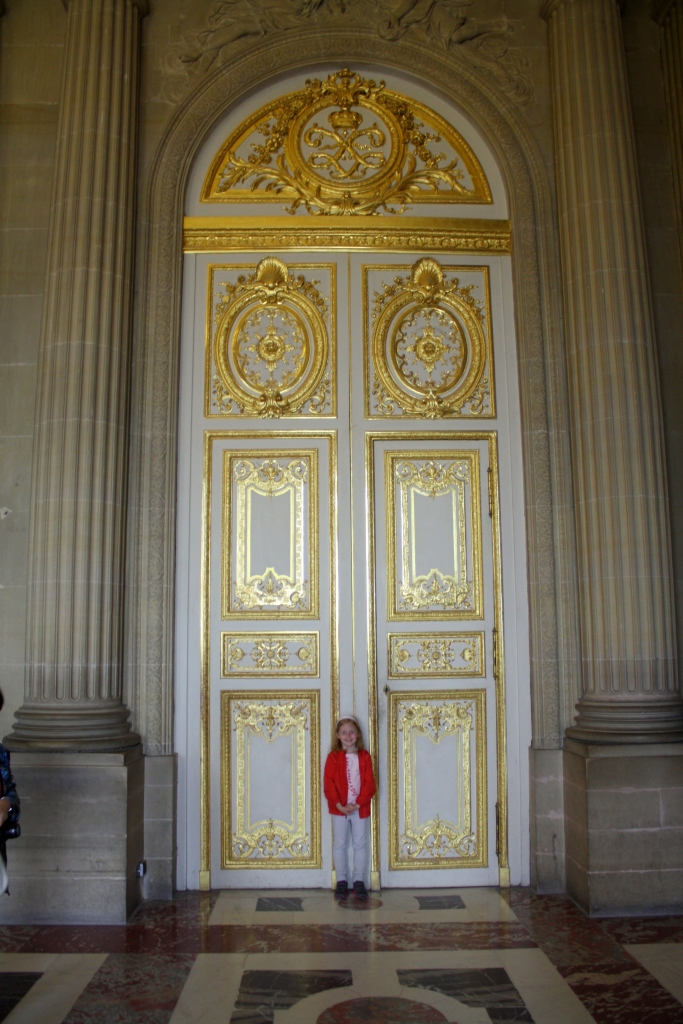 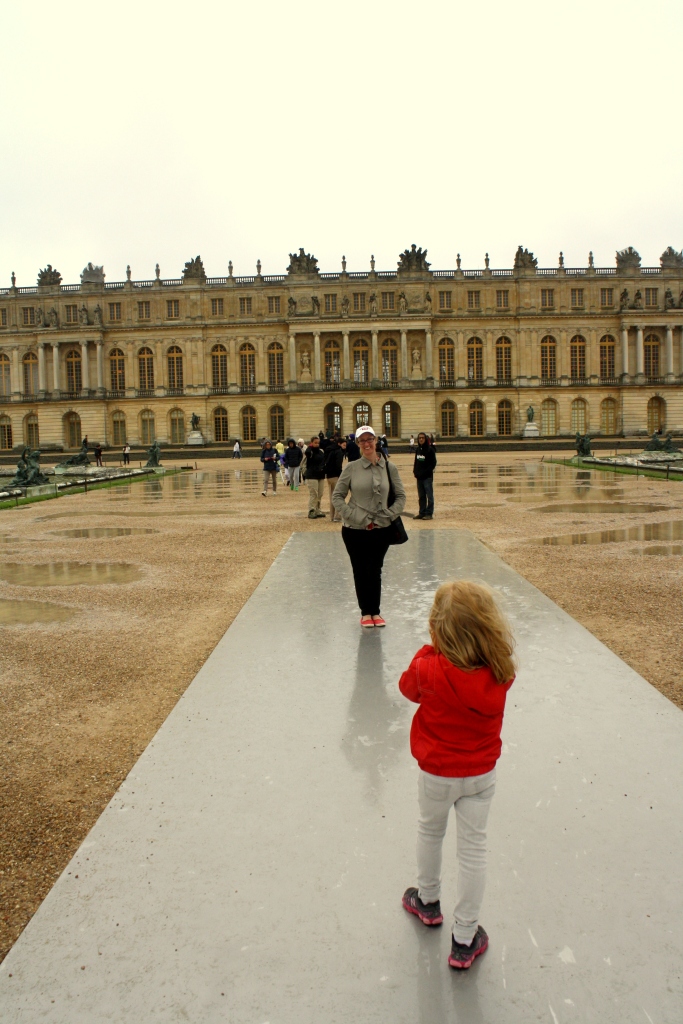 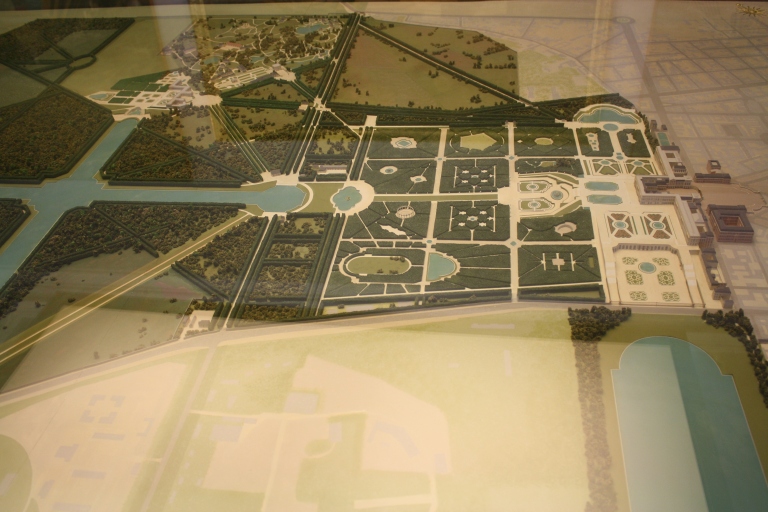 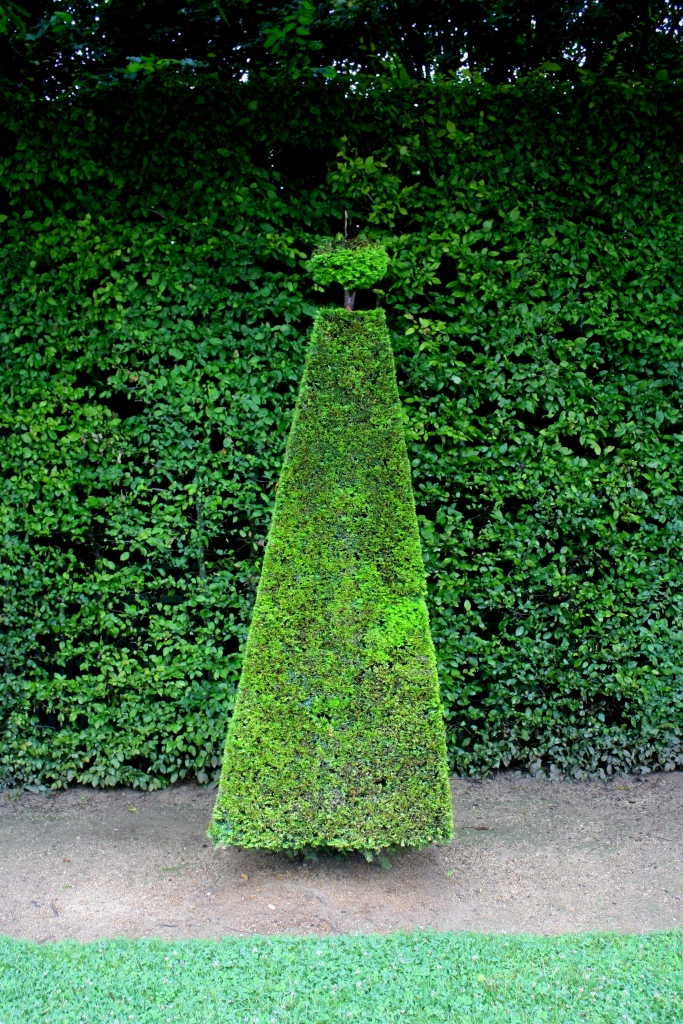 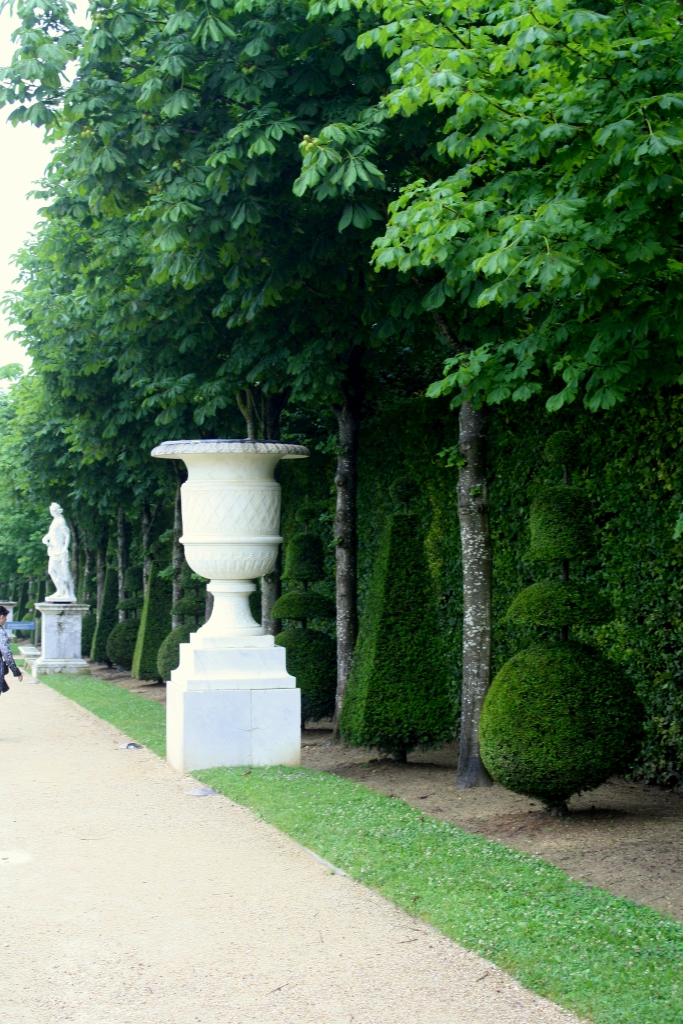 Besides being vast beyond comprehension, the gardens are VERY French and very formal….every tree and shrub is manicured to within an inch of its life.   It’s quite different from the English gardens that we toured last summer that were designed to look natural and untamed, but are actually very man-made and cultivated.  With the French, there is no question that nature has been tamed by man.

The next image is dedicated to my mother, who texted me to tell me that I was posting too many “naked pictures” on my blog and that “enough was enough”!  Honestly, I hope I haven’t offended anyone, but I didn’t even think about it…it’s art and statuary. Who cares? Only Lena, who is 6 years old, has pointed out a butt or a penis here and there.  So the next image is just for Mom! Enjoy!

The French garden designers also really like an allee of trees!  They were everywhere in the gardens. 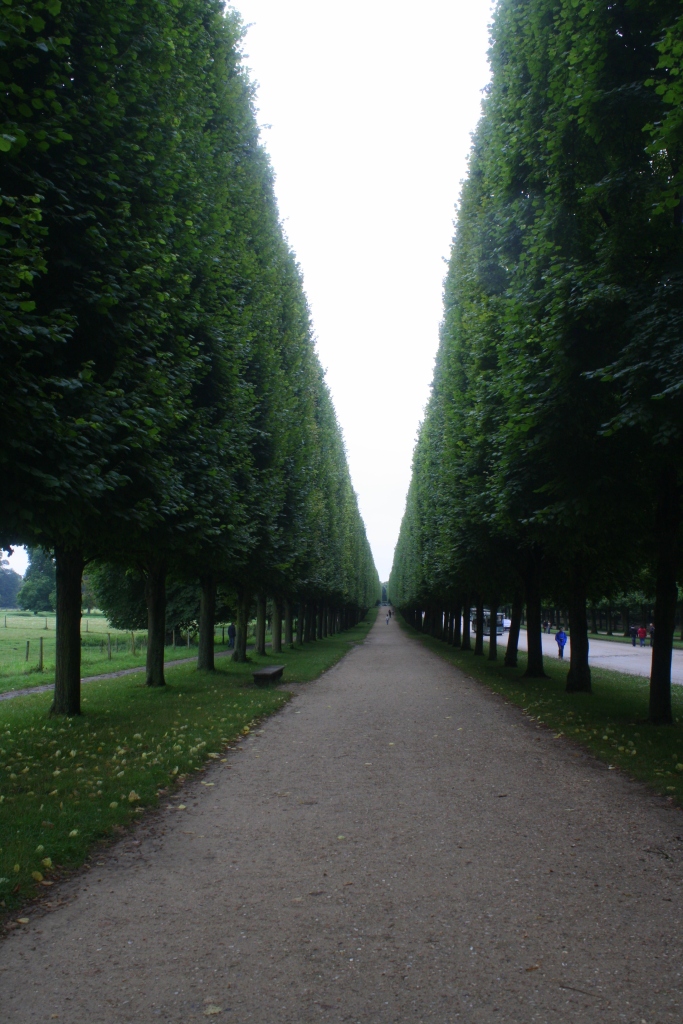 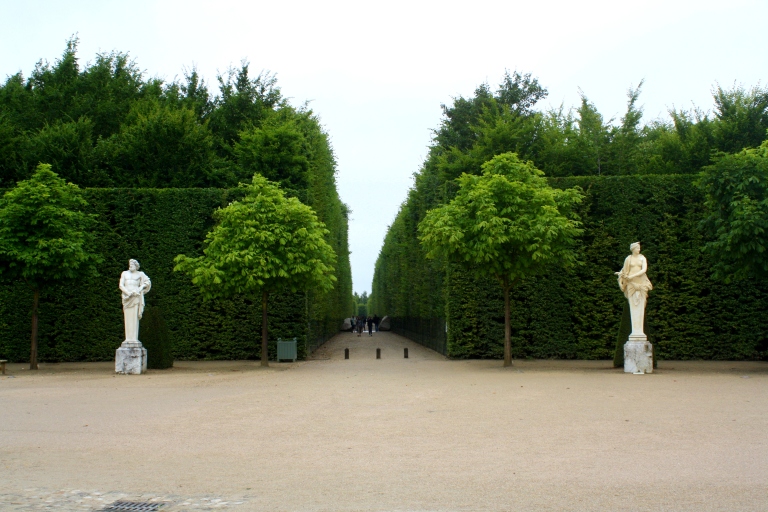 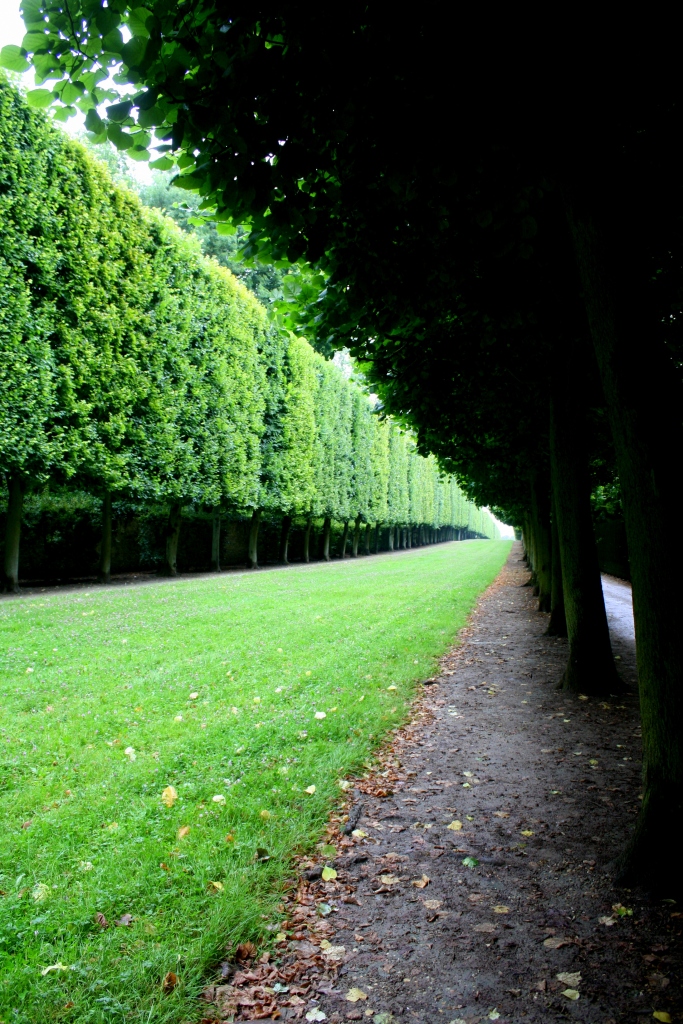 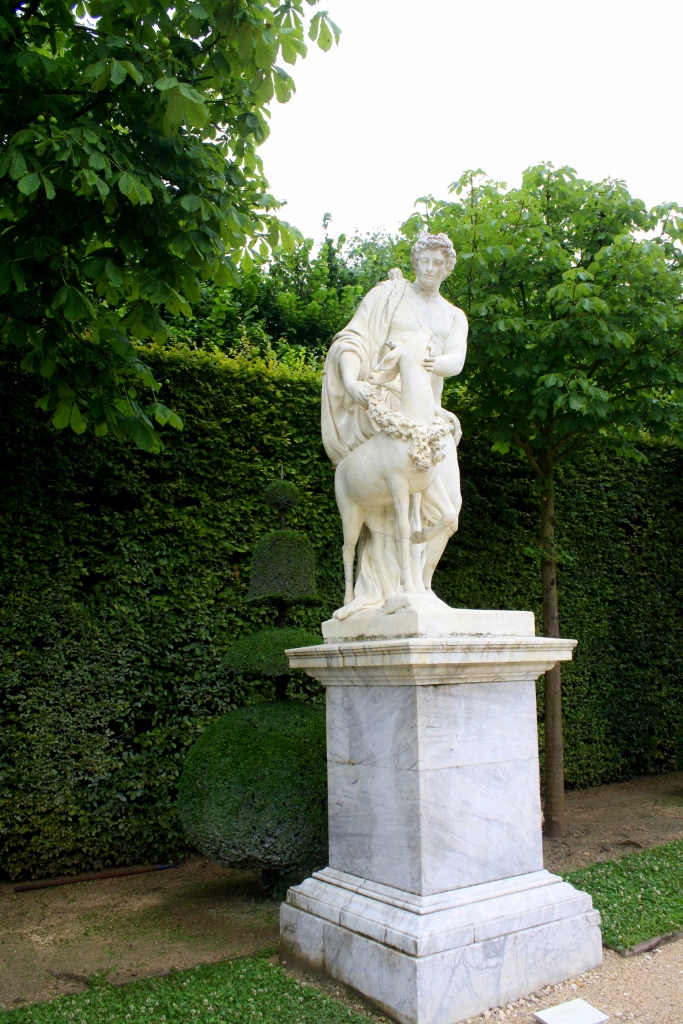 So…for the Sun King…the Palace wasn’t enough.  He needed a retreat from the formality of the French Court.   Being royalty was intense…every minute of every day was a planned, intricate, formal affair and it got tedious for the King and his close friends.  So King Louis XIV  had Le Grand Trianon built.  He and his friends could go down to the Le Grand Trianon and hang out in this 1672 version of a “man cave”.  It was also a great place to hide his mistress, the Marquise de Montespan.   In the pictures, you might notice that the interiors don’t look 17th century…they were redecorated by Napoleon and Josephine when he was living at Versailles…and they have remained in that Empire Style.  But you get the idea of just how “low key” this more informal retreat was. 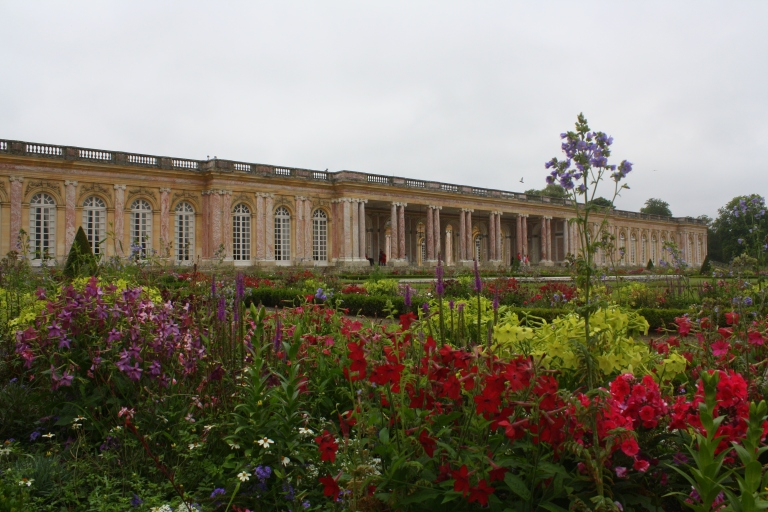 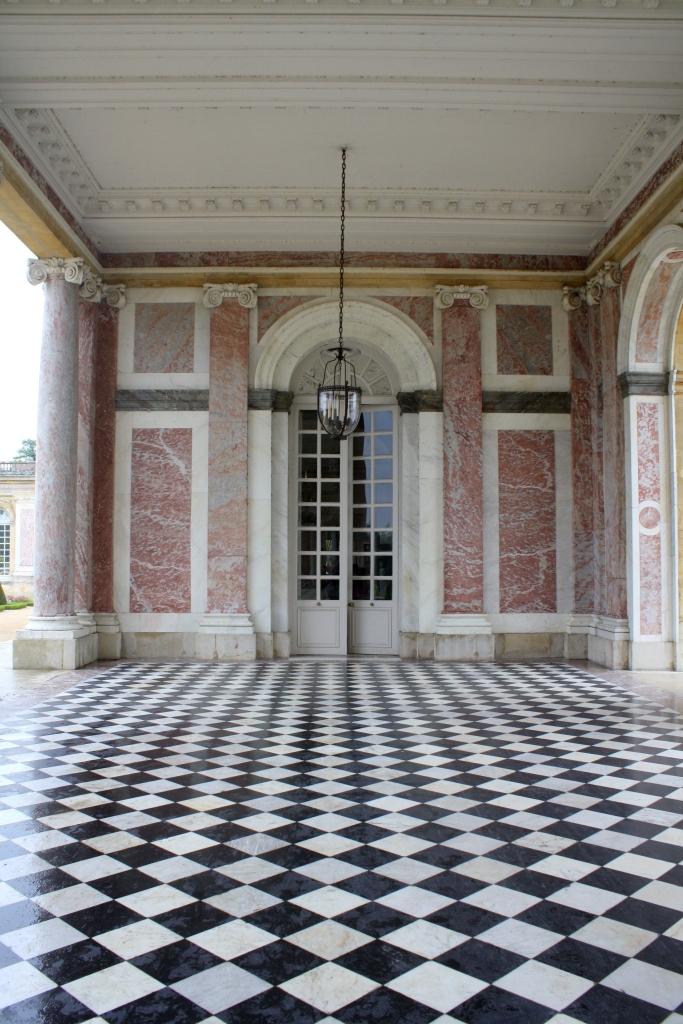 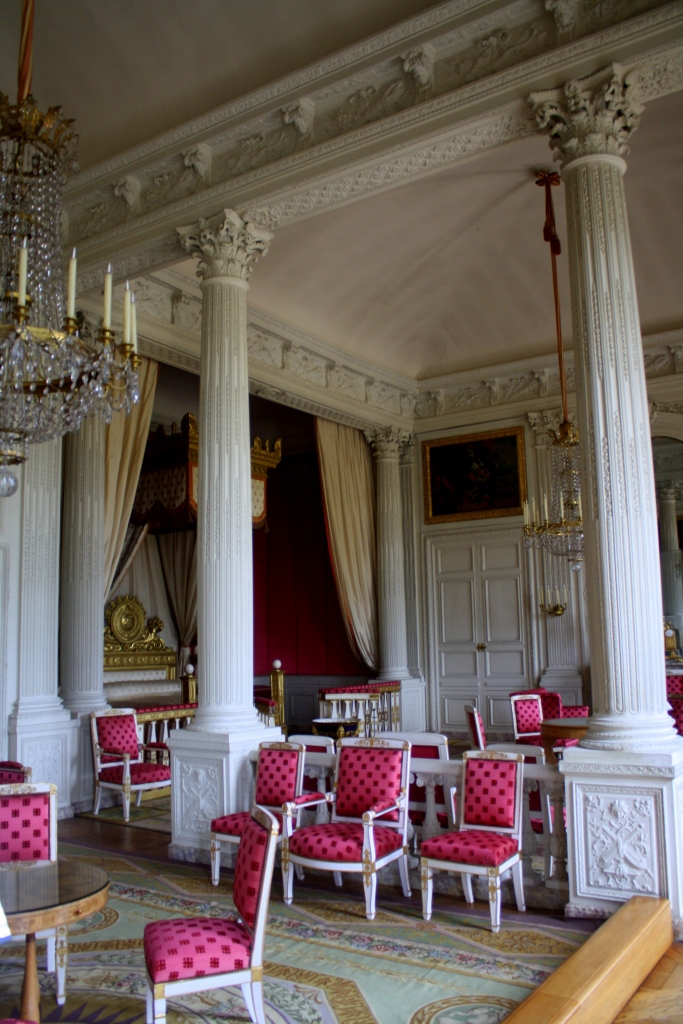 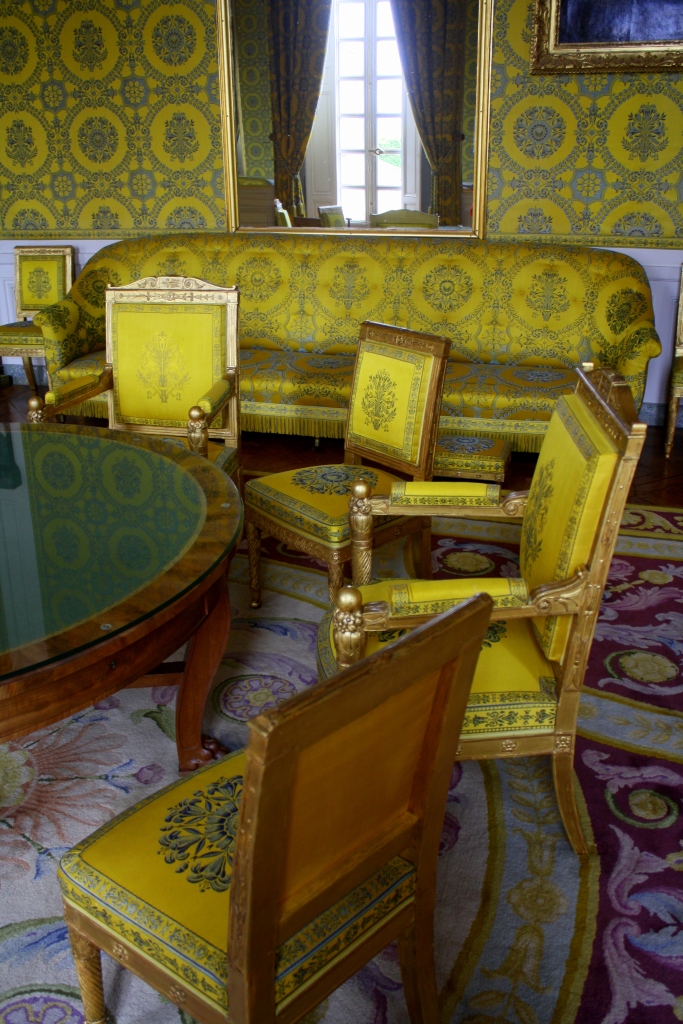 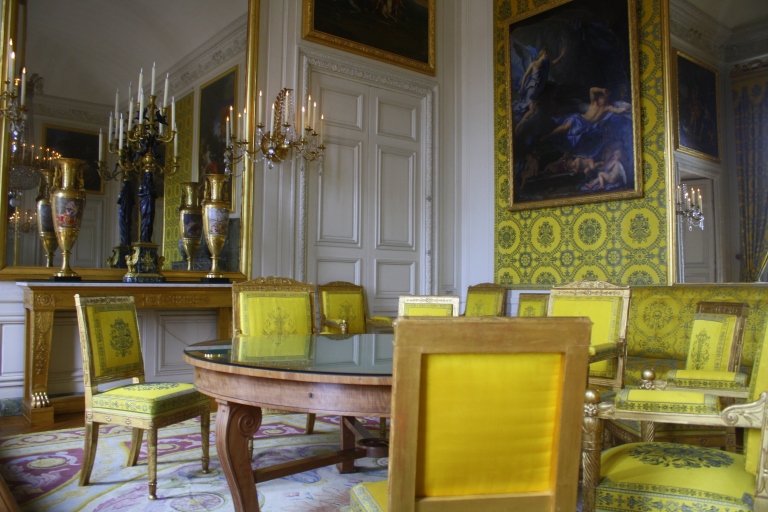 Next up was the smaller “retreat” on the grounds of Versailles…Le Petit Trianon.  It was actually built by Louis XV for his mistress, Madame de Pompadour, but she died before it was complete…so her successor (as mistress) Madame du Barry lived there for a time.  When Louis XVI became King, he gave Le Petit Trianon to 19 year old Marie Antionette, for her own use and enjoyment.  Everyone thinks of Marie Antionette and immediately thinks of the tall wigs, diamonds, huge dresses…”let them eat cake” version of her….but she was actually just a kid when she became Queen.  She was from royalty herself, but nothing compared to the formality and demands of the French Court.  When she was at the Petit Trianon, she could be simple and live care free.  In touring it, It is rather simple in comparison to the rest of Versailles.  She only let her very closest friends come to visit. 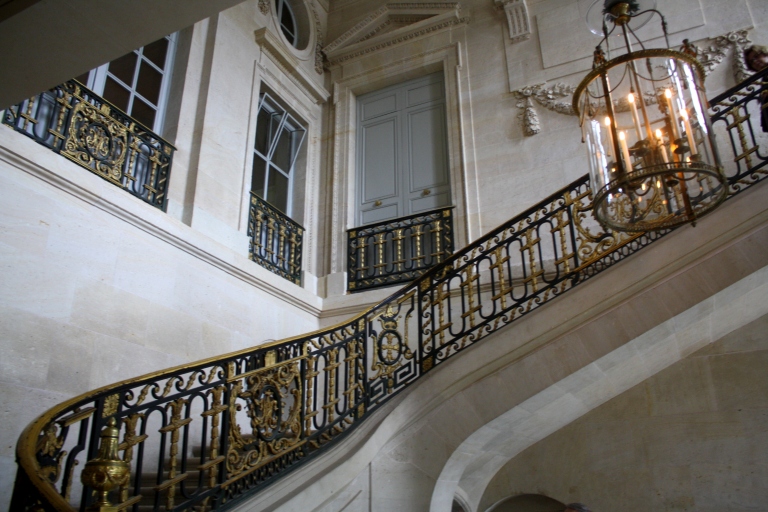 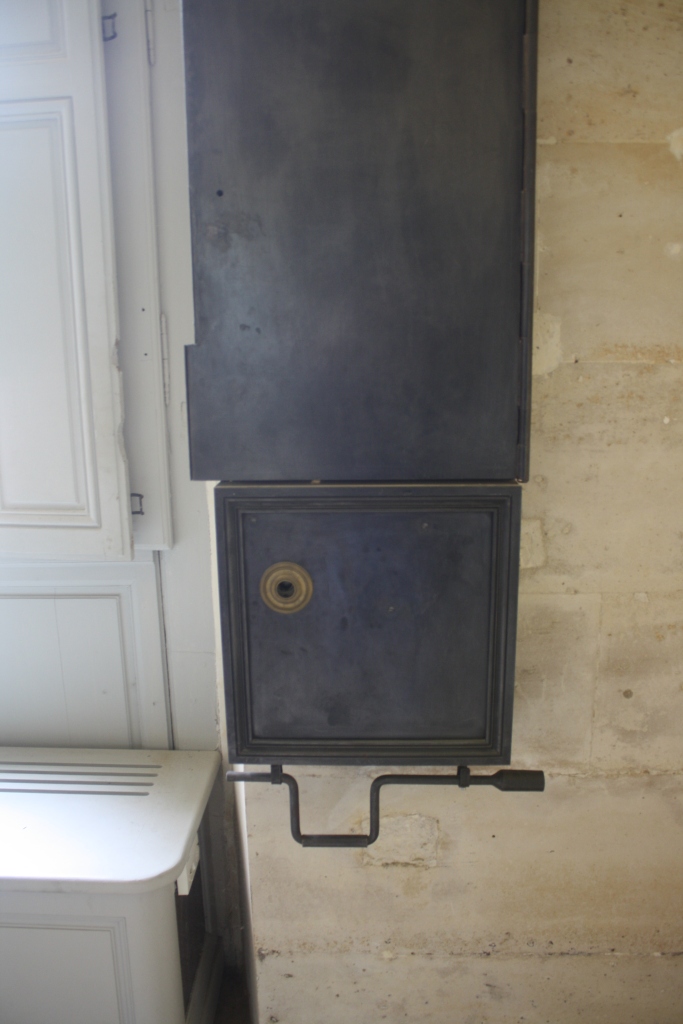 In the 1780’s, Marie Antionette had the Queen’s Hamlet constructed.  It was a rustic farm village, modeled after a Norman-style village.  It was a real, active farm village.  She brought in farmers and their wives to live there.  She and her children would dress up in peasant clothes and wander around…hang out in the little houses and live like the common folk.  You can imagine how this went down with the starving French people (and we all know Marie Antionette’s ultimate fate) .  But to visit the Hamlet was awesome.  It was very bucolic and fairy-tale like, and the scale was so much more “human” compared to the over- the- top size of the rest of the Palace gardens.  This was our favorite part of Versailles. 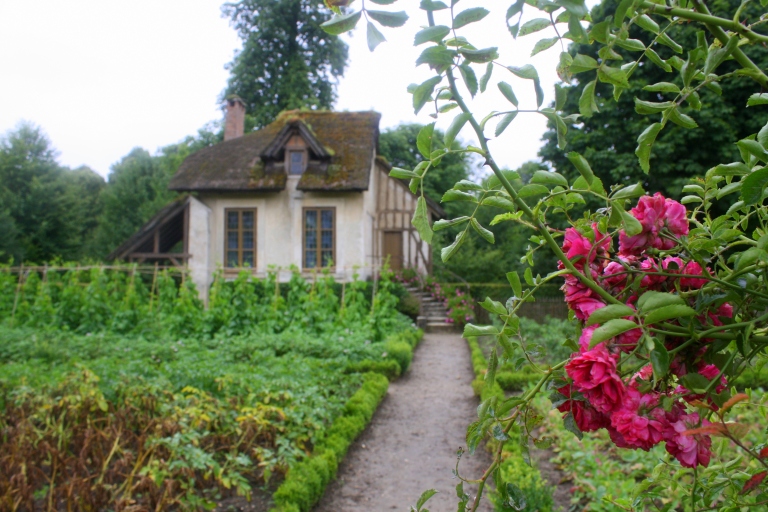 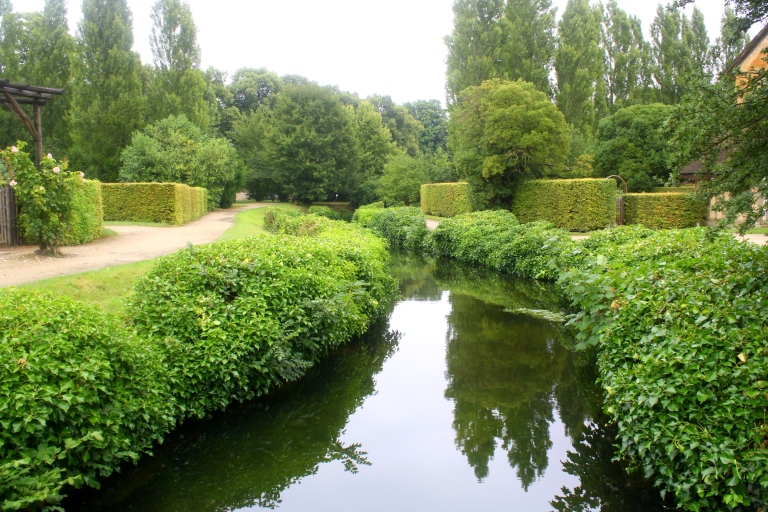 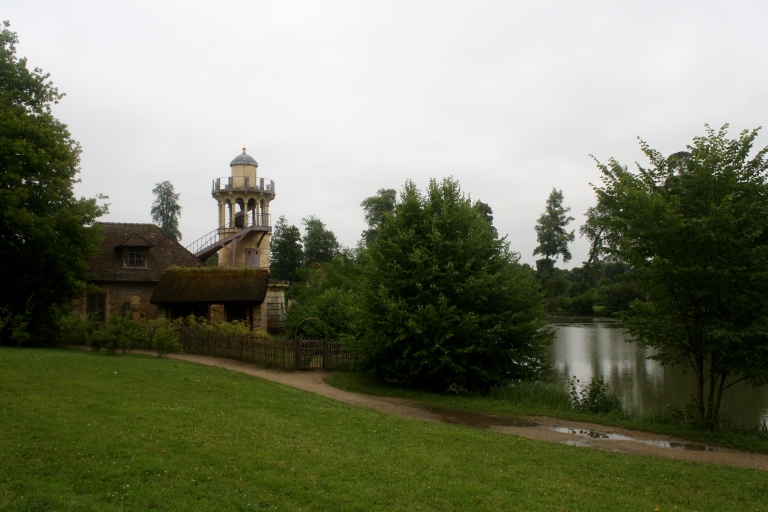 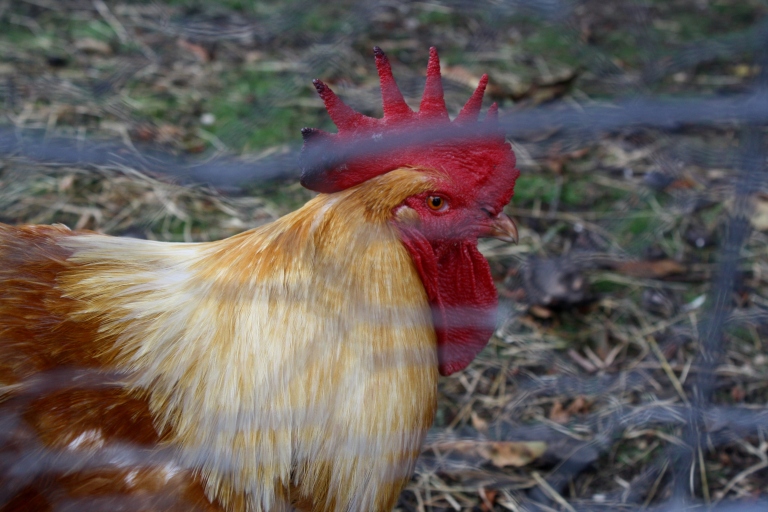 We enjoyed a coffee and a bit to eat at a little cafe beside Le Petit Trianon, and then decided that we had seen what needed to be seen!

We were totally exhausted and literally limped back to the train station.  Tomorrow (Friday) is Disneyland Paris!